My day started early with no breakfast, not even a cup of tea allowed, and a frosty walk down the hill to the Whittington. Feel apprehensive but not worried.

First stop, Nuclear Imaging department for the blue radioactive dye to be injected just beside my nipple. Not painful at all. They lay me on the table and strap my arms and legs in (do people often fall off the tables??). Then large plates close in to your sides, and they capture images of your insides. Not claustrophobic, but I felt like a foot in the Clarks’ fitting machine my brother and I used to have our feet measured in when we were little.

Then two hours to kill before I could be admitted. I take a walk in Waterlow Park (not many people know it, and it’s lovely – great views across London) and have a peak at Highgate Cemetery. It’s cold, sharp and bright – a fine winter’s day to clear your head. And I’m gasping for a cuppa.

I’m admitted as a day patient (means you’re in for under 23 hours), taken to a room to prepare. No bed, just a chair. Odd. Then a succession of healthcare professionals come in to see me. None of them can sit down as there’s only one chair. Odd. Various forms to fill, preparations to make, questions to answer.

Standard attire is two gowns (one on either way), surgical stockings, paper knickers and then a blue paper shower cap, “just to complete the look”,  I commented to one of the nurses. Her eyes twinkled in amusement.

Those paper knickers are something else. They’re huge and baggy, “one size fits all” apparently. I put them on and they felt backwards. So I swapped them around and they still felt wrong.

Rocking the two gown and paper knicker look while I wait for surgery. 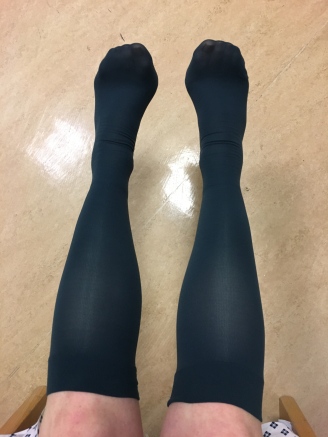 One of my visitors is Dr Caris, we haven’t met before but I immediately warm to his Dutch straight talking style. He explains what will happen in surgery and checks my understanding. Professor Vaidya checks I’m ok if Dr Caris operates, and that he’ll be overseeing the whole operation, which is all fine by me.  Dr Caris also draws an arrow on my neck pointing to the boob that they need to operate on. Now I know I’m in safe hands.

There is just a 1 in 100 chance that they will not get clear margins with the excision. In other words, all the cancer has not been cut out. If so, then another operation. Whilst highly unlikely, at least I know there may be further procedures. It’s also explained to me that my breast will take at least six months to settle in to its new shape, but I can have cosmetic surgery to make my breasts even if I want. That all feels like a long way off. I just want this cancer cut out.

Two nurses walk me to the anaesthetic room, where it becomes a veritable gathering. I’m there earlier than needed, and I lie on the bed hooked up to monitors, with two or three nurses, various medical students checking in and the anaesthetist.  Her friend, another anaesthetist, evens pops in at one point. A few awkward silences ensue as I lie there in my blue paper hat, staring at the doors to the operating theatre.

There’s a clock on the wall, ticking away. I can hear the monitor beeping my pulse. So, I try to get my heart rate to 60 to match the ticking clock. I get to 61 – the assembled company seem impressed with my party trick. At some point I drift off…..

I slowly stir in the recovery room. Dr Caris pops in – all went well with the surgery. They only took out two lymph nodes. Phew. I have two incisions – one in my breast and a much smaller one in my armpit.

Staff buzz around me, I’m groggy but very thirsty. They’re waiting for a bed on a ward, so I have a long wait in recovery. Then someone puts an NHS snack box by my bed – like one of those snack boxes you get on flights. Bloody hell, it’s a ham sandwich. On one of the many forms I filled out I stated that I don’t eat meat, but this message didn’t get through. But in the box is also apple juice, two cream crackers and a block of sweaty processed cheese – in my drugged up, starved state they are like manna from heaven.

I’m wheeled to the ward, is it about 8pm? By some miracle, mum has located my ward and is on the hospital telephone to check in with me. She asks where I am – I have no idea!

I look around and everyone looks much sicker than me. Then, joy of joys, the tea lady appears and I get a cup of tea. Bliss. Locate my mobile and make calls and texts. It’s done, the tumour’s out. We’re all relieved. Now sleep.